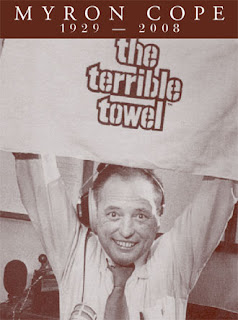 Let's all wave our towels to Myron today.
Posted by Christian Simko at 8:02 AM 1 comment:

A Quiet Day in New England

As the readers of this Blog know, I live in New England and just despise the Patriots. So, my original plan was to just blow off the Super Bowl and go to the movies. However my neighbor invited me to his Super Bowl party and I decided to attend it even though Patriots fans would surround me. I thought I’d just drink some beer, have some good food, and leave just after the half. I did want to see Tom Petty. What would unfold that evening still has me smiling from ear-to-ear. Not like the euphoria that I would experience for months after the Steelers won it all in 2005, but I have an extra bounce in my step as the rest of NE wallows in the mire of defeat.

I knew the Monday after the Super Bowl would be great as I actually couldn’t wait to listen to the local sports radio show for months. I just wish I had more time on my morning commute because the normally clogged roads were empty. Oh the sad Patriots just couldn’t take it and were calling in sick by the dozens. At work, I thought I was at a morgue for most of the day and I almost didn’t send out my planned trash talking emails to friends and coworkers, but I couldn’t resist. The reaction was priceless. How soon do they forget how they treated me in the Steelers’ 2001 and 2004 seasons.

18-1 is a lot of wins for absolutely nothing to show for it. Welcome to the draft table Patriots. Just like the Steelers, we’re just watching the Giants celebrate their championship. Congrats Giants for making the Patriots the most disappointing team in NFL history.
Posted by Christian Simko at 8:51 AM No comments: