First Round of Cuts Are Done

Ten players had to go and there was only one mild surprise. The Pittsburgh Post-Gazette has the list. Kevan Barlow was the interesting cut. It’s now looking like either Carey Davis or Gary Russell is going to make the team. This coming weekend is the big cut-down day as the roster must go from 75 to 53.

Here are the players that I think will get cut (18) and the ones who I think are on the bubble for the last 4 cuts.

There could be some very tough decision in this last cut and maybe one or two that involve economics.
Posted by Christian Simko at 4:33 PM 1 comment:

Nice Balance in the Defensive Backfield

The Steelers have done an excellent job of building a strong defensive backfield. It was tough to see Chris Hope leave after the Super Bowl season, but the team filled his spot well with Ryan Clark and Anthony Smith. Of all the positions on the team, the Steelers may have the most talent here. The last couple of cuts here may be among the toughest decision the team makes.

Even though Cowher benched him last season, Ike Taylor is very good cornerback, just look at Chad Johnson’s numbers against the Steelers. He will have a very good season this year and wants to move beyond Cowher’s humiliation of him. Deshea Townsend, what can I say… Every year, I write this guy off the team before camp starts and he just keeps getting better. Bryant McFadden was supposed to take over this year, but Townsend looks like he’ll be the starter again. McFadden will be a very good corner when his time comes.

At safety, Troy Polamalu is a freak. This guy makes plays that he has no business making. His combination of speed, football sense, and power is unrivaled. He is the difference maker on the Steelers defense. The other safeties need to be aware of how Polamalu plays and make sure they don’t get caught out of position. Both Clark and Smith compliment Polamalu’s aggressive style very well.

The team will probably keep 8-10 players in the defensive backfield. Here’s my view:
- Tyrone Carter – good vet, special teams contributor
- Clark – either he or Smith will start, both will play
- Ricardo Colclough – putting last season’s injury behind him, looks great so far
- William Gay – if he doesn’t make the team, practice squad
- Chidi Iwuoma – one of the best special teams players, but could get cut
- McFadden – will eventually start
- Polamalu – best in the league
- Smith – could be the starter, but will contribute regardless
- Taylor – back on track to have a great season
- Townsend – not a gifted athlete, but very smart
Posted by Christian Simko at 7:00 AM No comments:

Getting Older at Linebacker

While the Steelers started to address their aging linebacker situation by dumping Joey Porter and drafting Lawrence Timmons and LaMarr Woodley, there are still some issues here. This group may not rival some of the linebacking corps of Steelers past, but they should be solid. The main concern is that two of the four starters are over 30 (James Farrior and Clark Haggans) and the other, James Harrison, will be 30 next May. Only Larry Foote (27) is under 30. How much tread are left on these guys?

But, what concerns me more than the ages of the starters is the lack of depth behind them. Until this season, the Steelers have pretty much ignored the linebacker position in the draft. You’ve got to give the team credit for drafting some gems in the later rounds in the past. However in the last five years, Rian Wallace is the only linebacker drafted by the Steelers that is still on the team, and he was a fifth round choice. Woodley and Timmons have to be the future of this group and the team must draft more linebackers in the next draft.

I think the team keeps seven or eight linebackers. Here are the players I’m picking:
- Farrior – the rock of this defense
- Foote – takes over for Porter as the trash talker
- Haggans – needs to be the pass rushing force he can be
- James Harrison – your time to shine is now
- Clint Kriewaldt – valuable back up and on special teams
- Timmons – needs to get healthy
- Wallace – only if they keep 8
- Woodley – still my pick for defensive rookie of the year
Posted by Christian Simko at 8:31 AM No comments:

For the Steelers defense to be successful, the defensive line must be disruptive. The 3-4 defense doesn’t necessarily require a big-time pass rushing defensive end, but the Steelers can get some good pressure with these guys. Lets see how thing start to change as the 4-3 starts to get worked into the defensive plans. You'll probably

Casey Hampton gets everything started as opposing teams often need to put two linemen on him. He opens the holes for the linebackers to get into the backfield. Aaron Smith and Brent Keisel are perhaps the most unheralded players at their positions in the league. Watch for Keisel to really step it up this year.

The only problem with this group is that it is getting older. Hampton will turn 30. His solid backup, Chris Hoke, and Smith are already over 30. Keisel hits 30 next year. And, longtime backup, Travis Kirschke, is soon to be 33. There is a need for some young guys to get some experience here. As a result, I think Kirschke may go. He’s been a solid contributor for this team, including his special teams play, but the team needs to start planning for the future.

Do We Really Need a Mascot? 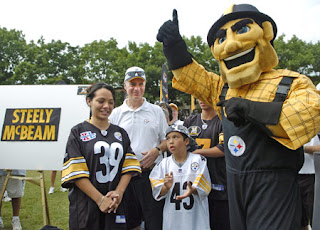 What makes the Steelers so special is that they are a throwback team in era of flash and glitz. The football product is more than good enough to stand on its own. We don’t need cheerleaders or mascot to draw us in. So why would the Rooney’s agree to a mascot now?

Sorting Out an Offensive Line

When the offensive line plays well together, the Steelers tend to win games. That’s not an earth-shattering observation, but reality. The team has some good young talent and solid veterans that have won a Super Bowl. With Alan Faneca, Max Starks, and Kendall Simmons playing out their final contract years, the Steelers need to have a plan in place for not only this season, but going forward as well. That challenge is creating the most interesting positional battles in this camp. Players are shifting all over the line and who ends up where is hard to even predict. I think eight players will stick and here’s my best guess at who stays:
-Willie Colon – Steelers are very high on Colon
-Alan Faneca – Best guard in the NFL plays hard for his big upcoming contract
-Chris Kemoeatu – Another young talent with a ferocious attitude
-Sean Mahan – Biggest free agent signing of the year
-Kendall Simmons – Looks strong, overcoming his issues, another free agent to be
-Marvel Smith – Solid performer
-Max Starks – Free agent to be, losing ground to Colon
-Cameron Stephenson – Rookie makes the team

I think that the new line won’t be cemented until the last preseason game. Out of those eight that make the team, the line has a chance at being very good. With Faneca and Starks playing out their contracts (and possibly Simmons too), offensive line will be the team’s biggest draft need next year.
Posted by Christian Simko at 1:56 PM No comments:

Just got back from Pittsburgh and the city is very excited about Mike Tomlin. First observation from his first game, Tomlin had his team ready to play. In the preseason, it really doesn’t matter if your team wins or loses, but it does matter how they play. And, by the look of things, Tomlin had his team very well prepared. This is the observation that has me most pumped about this season.

As for what I saw from particular players:
Carey Davis: In my previous analysis of the running backs, I left him off the final roster. I know it was only one preseason game, but this guy looked good. He has me starting to think he may have a chance. The Steelers do need a back up fullback and he may just be the guy.

Gary Russell: I was very impressed with his game. He hits the hole hard and bounces off tacklers. Russell and Davis may battle for the last RB/FB slot on the team.

Nate Washington: Hey Nate, do your hands actually work? He dropped a lot of critical catches last year and it looks like he hasn’t solved that problem yet. There’s no questioning that he’s got some talent, but he just can’t catch the ball. Maybe he and Ike Taylor need to go to the same remedial hand school together.

Walter Young: Trying to make the team again, he is out of practice squad options. Young looked pretty good in this game. His size is a nice advantage. If he continues to play well and Washington doesn’t solve his hands issue, then Young has a shot to make the roster over Washington.

LaMarr Woodley: Mark it down now, Woodley will be the rookie defensive player of the year. This guy looked great. As a converted defensive end, I was a little worried about his pass coverage skills, but he made a very nice play. Woodley will be a difference maker on the defense.

Willie Reid: Willie may need to join Washington and Taylor in hands school. This guy has no history of problems like this, but he dropped almost every kick to him. He did have one nice kickoff return, which showed his potential. Needs to show he can handle the return duties or he may be out of a job.

Cedrick Wilson: Just throw Cedrick the damn ball. He made some real nice plays, and if Ben keeps targeting him, he could have a nice season. There’s no questioning the top three receivers on this team.

Offensive Line: There’s a lot of talent on the line and it will be interesting to see how things shake out. I’ll be going into more details here in an upcoming analysis.
Posted by Christian Simko at 11:20 AM No comments: